If you find yourself losing several minutes or possibly hours at a time after using social media, you’re not alone...

If you find yourself losing several minutes or possibly hours at a time after using social media, you’re not alone.

What started out as an apparently great way to connect with friends and family,
has in some cases evolved into a quite serious addiction that can affect all age groups. You may enjoy social media and use it daily, but are you addicted to it?.

There are two main types of addiction: substance addiction and behavioural addiction. The first of these kinds will no doubt be familiar, the second refers to addiction that involves compulsive behaviours. These are persistent, repeated behaviours that an addicted person carries out, even if they don’t offer any real benefit.

The causes of social media addiction

The word “addiction” is derived from Latin and means “enslaved by” or “bound to.” Anyone who’s struggled to overcome an addiction, or tried to help someone else do so, will understand why.

According to the Mayo Clinic like many mental health disorders, several factors may contribute to development of drug addiction. The main factors are:

• Environmental factors. Including a person’s family’s beliefs and attitudes and exposure to a peer group that encourages drug use, seem to play a role in initial drug use.
• Genetics. Once someone has started using a drug, the development into addiction may be influenced by inherited (genetic) traits, which may delay or speed up the disease progression.

Brain changes and the development of tolerance

Over time, the brain adapts in a way that makes the sought-after substance or activity less pleasurable.

In nature, rewards usually come only with time and effort. Addictive drugs and behaviours provide a shortcut, flooding the brain with dopamine and other neurotransmitters. Our brains do not have an easy way to withstand the onslaught.
Addictive drugs like cocaine can provoke the release of two to 10 times the amount of dopamine than occurs naturally and it does so more quickly and reliably.

In an addicted person, brain receptors become overwhelmed. The brain responds by producing less dopamine or eliminating dopamine receptors. This is an adaptation like turning the volume down on a loudspeaker when noise becomes too loud.

The result is that dopamine has less impact on the brain’s reward centre. People who develop an addiction typically find that over time, the desired substance no longer gives them as much pleasure. Then, in an effect known as tolerance, the user must take more of it to obtain the same dopamine “high” because their brains have adapted.

Addiction exerts a long and powerful influence on the brain that manifests in three distinct ways: craving for the object of addiction, loss of control over its use, and continuing involvement with the drug or object, despite adverse consequences.

The brain registers all pleasures in the same way, whether they originate with a psychoactive drug, a monetary reward (such as in gambling), a sexual encounter, a satisfying meal – or spending time on social media. 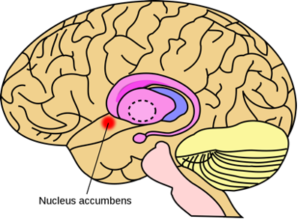 Addictive drugs provide a shortcut to the brain’s reward system by flooding the Nucleus Accumbens with dopamine. The hippocampus lays down memories of this rapid sense of satisfaction, and the amygdala creates a conditioned response to certain stimuli.

It’s easy to understand how people become physically addicted to certain drugs, sometimes very rapidly or even instantly. For example, Crack Cocaine is far more potent and addictive than ordinary cocaine. The high state it produces is so pleasurable and so short that the user quickly needs more of it to maintain their high. Eventually the user must have more of the drug just to feel normal.

Why social media is addictive?

Social media was carefully designed to be as addictive as possible. So much so that the children of social media platform’s designers are often not allowed by their parents to use it. To understand this problem more fully, please visit The Awful Truth page of this website where you’ll find some excellent videos featuring some well-known voices from Silicon Valley.

There’s a popular belief that social media platforms are free. But this is a half-truth because most people don’t understand the massive trade-off that takes place invisibly in the background when you use it. The more time you spend on platforms like TikTok, Facebook, WhatsApp, Instagram and YouTube the more money you’re generating for the platform from the platform’s advertisers. Your time and attention is being cleverly monetised by algorithms and you are the product.

Social media platforms are cleverly designed to be as manipulative and addictive as possible. The companies that run today’s most successful social networking apps and websites work hard on improving and growing the amount of people they can bring onto their platform, alongside maximising the amount of time a person spends there. The more time a person spends, the more ads the platform can run, and the bigger the platform’s profits. In the end, it’s a matter of business, and the popular social media platforms are all built for brutal efficiency when it comes to getting people to stay.

The reward centres of the brain are most active when people are talking about themselves. Because of the effect it has on the brain, social media is addictive both physically and psychologically. According to a new study by Harvard University, the act of disclosing information about oneself on social networking sites lights up the same part of the brain that also ignites when taking an addictive substance, eating or engaging in sexual activity (i.e. the Nucleus Accumbens).

When someone experiences something rewarding or uses an addictive substance, neurons in the principal dopamine-producing areas in the brain are activated and dopamine levels rise. Therefore, the brain receives a “reward” and associates the drug or activity with positive reinforcement.

The positive feelings experienced during social media use are only temporary. The way your brain engages in this positive reinforcement is also seen in other addictions. Thus, as the feel-good dopamine wears off, you’ll go back to the source (in this case, social media) for more…