The Negative Effects of Social Media on Interpersonal Communication

This is a huge topic and I’ve already written extensively about it in blogs and other articles you can find on this website. New ones will be published every week. This piece seeks to put a different perspective on what I see as a major issue. In November 2022 I gave a TED Talk on this topic...

According to Dr Paul Booth, an assistant professor of media and cinema studies in the College of Communication at DePaul University in Chicago, social media certainly affects how we engage with one another across all venues and ages. “There has been a shift in the way we communicate; rather than face-to-face interaction, we’re tending to prefer mediated communication,” he says. “We’d rather e-mail than meet; we’d rather text than talk on the phone.”

The area of our lives most affected by social media is personal relationships. We simply don’t meet face-to-face as much as we used to, preferring instead to do so by way of information technology. Whilst we may imagine our communications on social media are deeply meaningful, the reality is we’re not building relationships with the people we’re communicating with as strongly as we would if we were meeting them in person.

Sherry Turkle is a professor, author, consultant, researcher, and licensed clinical psychologist who studies the psychology of people’s relationships with technology, especially digital technology. She is the founding director of the MIT Initiative on Technology and Self. Back in April 2012 she gave a TED Talk with the title Connected, but alone?.

In this talk she explains how our devices have the power to not only change how we behave, but even who we are. To illustrate this, she gives some excellent real-life examples of behaviours that prior to social media would have raised eyebrows. For example, people today people send texts or emails during corporate board meetings, and they also send texts, do online shopping, and surf Facebook during other presentations and meetings. She even reports (in all seriousness), how people talk to her about ‘the important new skill’ of making eye contact while you’re texting… “they say it’s hard, but it can be done”.

Apparently or perhaps amazingly, people even text at funerals – Professor Turkle studies this, so she knows. And she worries that we’re setting ourselves up for trouble in how we relate to each other – and ourselves. She feels we’re getting used to a new way of being alone, even though we may be together…

Memorably, she describes how one 18-year-old boy, (who used texting for just about everything) said to her wistfully, ‘someday, someday, but certainly not now, I’d like to learn to have a conversation.’ Perhaps you’re wondering why some people think having a conversation is undesirable. The answer is because it takes place in real time, and you can’t control what you’re going to say or what you’ve said…meaning you can’t edit and delete like you can on social media.

The importance of connection and empathy

Professor Turkle’s main argument is that because people in interpersonal social situations are often distracted by their phones, they pay insufficient attention to one another, creating increasingly shallow relationships. She believes we must reinstate face-to-face conversation to reclaim the value of human empathy and connection since empathy plays a vital role in human connection. It’s the ability to understand what other people are feeling and understand things from their perspective. This enables people to sympathise with others and deepen their connection to one another. In adults, conversation fosters introspection and belongingness – but we’ve let technology interfere with these basic human needs and we allow this at our peril.

The far-reaching effects of cyberbullying 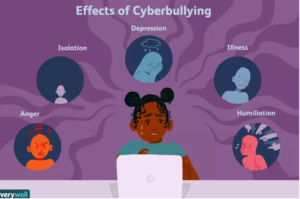 Dr Nicholas D. Bowman is a professor of communication studies and has noted how actions that trigger a bad online relationship are likely the same ones that trigger a bad relationship in real life – only the modality has changed. Take as an example cyberbullying. This has largely the same behavioural, emotional, and affective consequences as does ordinary non-cyber bullying. Except when it happens on social media there’s a big difference. It allows for more contact, more communication – but in a far more public manner.

In a bullying event, the person being bullied can often remove themselves from the environment, at least temporarily. For example, a child being bullied at school can escape the playground when he or she goes home each night. “However, cyberbullying is marked by its persistence,” says Bowman. He explains how with cyberbullying the hurtful messages don’t stay in a particular space, such as a playground, but follow the child home. If we consider that bullying’s effects on an individual can build over time, then it stands to reason the increased contact between bullies and their targets on social media will exacerbate the problem.

Dr Paul Booth reminds us that one potentially negative consequence of social media is the lack of privacy. Because interpersonal communication is changing, we’re finding ourselves more apt to share on social media the sort of information we might previously have shared privately face-to-face. He says, “We always have to keep in mind that social networks are searchable – even when privacy settings are set extremely high, it’s always possible to find out personal information.” Talking of which…

5rightsfoundation.com/about-us/”>5Rights Foundation is an internationally active non-governmental, non-profit charitable organisation headquartered in London. Their recent research has found that services such as Facebook, Instagram and TikTok are allowing children, some as young as 13 years old, to be directly targeted within 24 hours of creating an account with a stream of harmful content. Despite knowing the children’s age, the companies are enabling unsolicited contact from adult strangers who are recommending damaging content including material related to eating disorders, extreme diets, self-harm, and suicide as well as sexualised imagery and distorted body images. You can read the shocking full 5Rights report on how digital design puts children at risk here.

5Rights website points out that although these services are not deliberately designed to put children at risk, their research shows the risks they pose are not accidental. These are not “bugs” but features. Revealing Reality interviewed engineers and designers who explained that their design for social media platforms is there to maximise engagement, activity, and followers — the three drivers of revenue. It is not there to keep children safe.

When individuals spend more time with their smartphone than interacting with the people around them it has a detrimental effect on face-to-face relationships. It could be a parent checking his or her e-mail during a family dinner or a young college student updating Twitter while on a first date. As Paul Bowman says. “For these people, they likely feel such a strong sense of identity online that they have some difficulty separating their virtual actions from their actual ones.”

For more information on social media addiction in teens (and others), please read my blog. If you’re a parent you could also read the CNN Health article: Here’s how to stop the worst of social media.